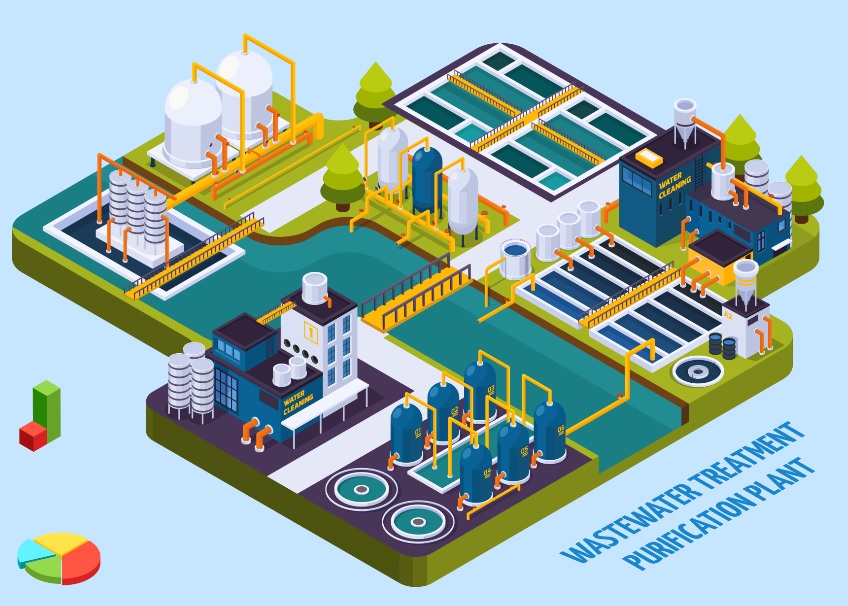 The importance of establishing a sewage treatment plant

What is sewage water?

Sewage water or wastewater is the liquid waste resulting from various human activities, whether domestic, commercial, or industrial; It is collected through a network of pipes and channels to reach a specific collection point to start the treatment process, and this point is called a sewage treatment plant and aims to convert wastewater or sewage into water that can be reused for other useful purposes that may include irrigation of gardens and agricultural fields or Replenishment of surface and groundwater resources and their use can also be directed to meet the specific needs of the inhabitants in their homes (eg toilet flushing), business and industry. This process contributes to water conservation as part of sustainable water development, which reduces scarcity and drought and relieves pressures on groundwater and other natural water bodies.

Due to the scarcity of water, the increase in population numbers, industrial progress, and the increase in welfare in most parts of the world, the quantities of sewage water increased to a large extent, so it was necessary to search for means aimed at treating sewage water for use in agriculture, and for cooling in factories.

Because of the negative impact of untreated sewage water on the environment, sewage negatively affects humans and the surrounding environment as follows:

Advantages of setting up a sewage treatment plant:

It is the wastewater resulting from use in homes and commercial places such as markets, restaurants, banks, schools, and hospitals.

It is the wastewater coming from different factories.

It is the water that infiltrates the sewage networks from groundwater wells through infiltration and leakage through damaged pipes or through pipe connections, in addition to rainwater that enters through manholes and drains.

It is rainwater or water resulting from melting snow that enters sewage systems.

The sewage treatment process goes through several stages as follows:

At this stage, all materials that hinder the post-treatment processes, such as tree branches, gravel, oil, sand, and soil, are removed using several tools:

Sand retention basins: deposition of inorganic materials such as oils, sand, soil, and gravel; Where sewage is passed through sand sedimentation basins, and the sedimentation is controlled by controlling the sedimentation speed, to be stored in specific basins and sent to the landfill later. These basins are characterized by their small size.

In this stage, the high-density materials that may be organic or inorganic are removed, and this stage leads to a decrease in the concentration of suspended materials by up to 50%.

It is the stage in which the organic materials in the wastewater are oxidized by aerobic bacteria, and the treatment method is used according to the biological growth system used for microorganisms, as follows:

Aerobic Suspended Biological Growth: The bacteria are suspended in the wastewater during the mixing process.

Activated sludge: in which microorganisms are activated by adding a small amount of previously activated sludge, then mixing the wastewater and stirring it to ventilate it, so that the bacteria oxidize the organic materials, and the continuous stirring process leads to coagulation of suspended materials and an increase in their concentration to be disposed of later in the secondary sedimentation process.
Oxidation ponds: They are simple ponds, in which the water is treated in a natural way based on algae, sunlight, and the elements in the wastewater.

Successive aerobic biological growth, the bacteria are attached to supports, and the following methods are used for biological treatment:

Biological filters: Biological filters consist of basins built of bricks or reinforced concrete, and filled with gravel or plastic. When wastewater exits from the primary sedimentation basin, it is distributed on the surface of the filters by perforated tubes, so that the water penetrates the gaps between the gravel, and thus a gel layer is formed on the surface containing On bacteria and microorganisms to carry out the oxidation process.

Rotating biological discs: They are circular discs made of plastic that rotate slowly and are immersed in the middle of the wastewater. As a result of the rotation, a biological layer is formed that begins the treatment process when these discs are immersed in wastewater and then exposed to the atmosphere.

Disadvantages of using water from a sewage treatment plant:

It causes health problems if it is not treated properly, it may cause damage to the plant, so care must be taken to treat wastewater properly and also to perform periodic maintenance on time.

How do we maintain water quality?